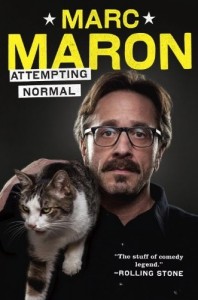 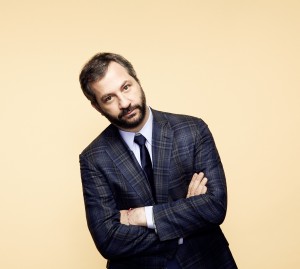 Comedy freaks have known and loved Marc Maron for years. But it’s his podcast, WTF, that has completely transformed the world of comedy and comedians. He has interviewed just about every comedian alive, and perhaps some that aren’t or weren’t. What makes the interviews so spectacular is that while he gives his guests airtime to explore their ideas and orientation, it’s really Marc Maron who comes across the most: he’s dystopic, cranky, hilarious, moving, and unnervingly fun.

He comes to Writers Bloc to talk about his ups and downs in the world of comedy—and in his life. Attempting Normal is Marc Maron’s journey to his perch at the top of the world—as one of the most pre-eminent voices in the field, and as a guy who has finally fulfilled a lifelong goal of getting his own TV show. His new IFC show, Maron, debuts on Friday, May 3, at 10:00 pm and we get to weigh in with him at Writers Bloc just a few weeks after his dream come true comes to life.

From Amazon: Marc Maron was a parent-scarred, angst-filled, drug-dabbling, love-starved comedian who dreamed of a simple life: a wife, a home, a sitcom to call his own. But instead he woke up one day to find himself fired from his radio job, surrounded by feral cats, and emotionally and financially annihilated by a divorce from a woman he thought he loved. He tried to heal his broken heart through whatever means he could find—minor-league hoarding, Viagra addiction, accidental racial profiling, cat fancying, flying airplanes with his mind—but nothing seemed to work. It was only when he was stripped down to nothing that he found his way back.

Attempting Normal is Marc Maron’s journey through the wilderness of his own mind, a collection of explosively, painfully, addictively funny stories that add up to a moving tale of hope and hopelessness, of failing, flailing, and finding a way. From standup to television to his outrageously popular podcast, WTF with Marc Maron, Marc has always been a genuine original, a disarmingly honest, intensely smart, brutally open comic who finds wisdom in the strangest places. This is his story of the winding, potholed road from madness and obsession and failure to something like normal, the thrillingly comic journey of a sympathetic f***up who’s trying really hard to do better without making a bigger mess. Most of us will relate.

Judd Apatow is a director/screenwriter/producer behind TV shows like The Ben Stiller Show and Freaks and Geeks and the films The 40 Year Old Virgin and Bridesmaids.