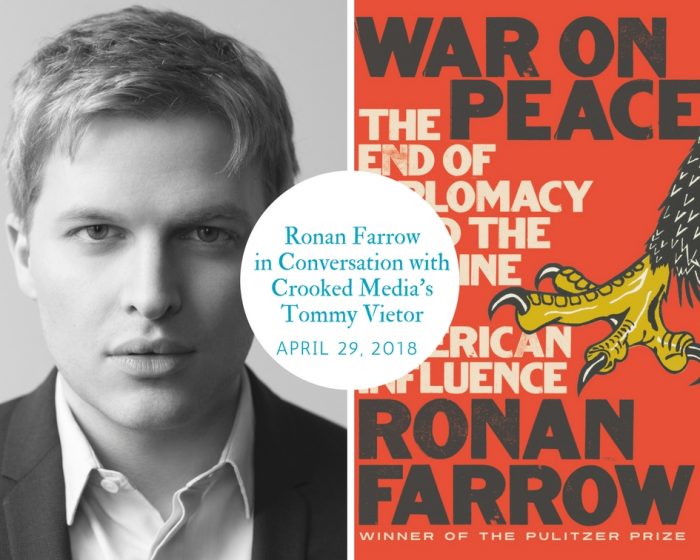 Each ticket includes a copy of War on Peace by Ronan Farrow, $42.

Where is our global leadership? What is the far-reaching impact of a shrinking State Department?
Before Pulitzer-Prize winning journalist and author Ronan Farrow ignited the #MeToo storm with his socially transformative articles in The New Yorker about sexual misconduct, he was a diplomat in the Obama Administration. He served in the office of Special Representative for Afghanistan and Pakistan, and later  joined then-Secretary of State Hillary Clinton’s office to review the United States’ social and economic policies on youth. In his new book, War on Peace: The End of Diplomacy and Decline of American Influence, Farrow confronts the current decimated State Department– its empty offices and unfilled positions– and suggests that American diplomacy is under siege, that our professional peacemakers, our diplomats, are becoming a memory of the past.  He interviews every former Secretary of State, plus whistleblowers and warlords, and warns that our weakened primacy in global leadership threatens war and peace all over the world.
Tommy Vietor served in the Obama Administration in the National Security Council, and was a spokesman for President Obama, as well as spokesman for the United States National Security Council. He is of course one of the founders of Crooked Media, and hosts “Pod Save America” as well as “Pod Save the World.”