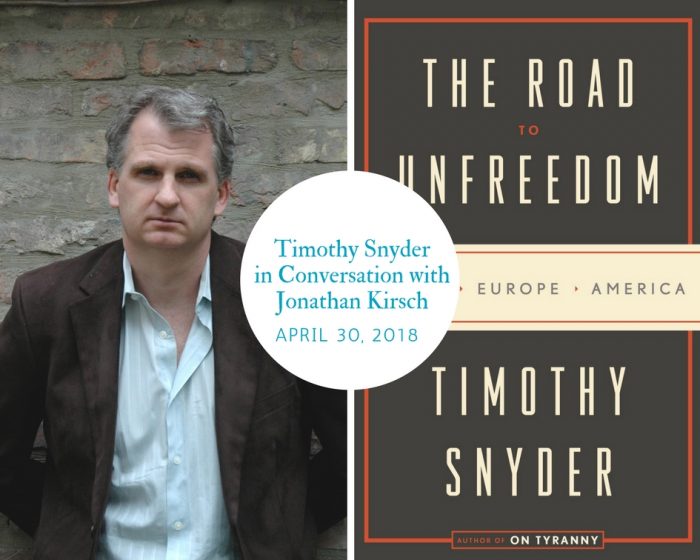 Our daily headlines are full of details about Russian meddling in our 2016 presidential election– and the implications and ramifications are terrifying. According to historian Timothy Snyder, it’s not just American institutions that are threatened– it’s Western European governments as well. This is not just a Trump/Russia scandal but a very clear war on American and European democracy masterminded by Vladimir Putin.

Snyder cautions that as populism and nationalism rise in Europe and in our own United States, so does the trend of authoritarianism. According to Snyder, the current administration has employed the old and successful Russian tactic of creating fake news, and discrediting real journalism and factual reporting. Attacks on the press, cyber warfare here and in Western Europe, and other strategies have become daily facts of life which Timothy Snyder says have created The Road to Unfreedom–to the defeat of democracy and the rise of power to a select few, to authoritarianism.

Timothy Snyder is the Levin Professor of History at Yale, and is an expert on 20th Century Fascism and Nazism. He is the author of the acclaimed books, On Tyranny, Black Earth: The Holocaust as History and Warning, and Bloodlands: Europe between Hitler and Stalin.

In conversation with Jonathan Kirsch, Book Editor for The Jewish Journal and author of thirteen books, including Moses: A Life; The Harlot by the Side of the Road; and The Short Strange Life of Herschel Grynszpan: A Boy Avenger, A Nazi Diplomat and a Murder in Paris. In his spare time, Kirsch practices law in Century City.