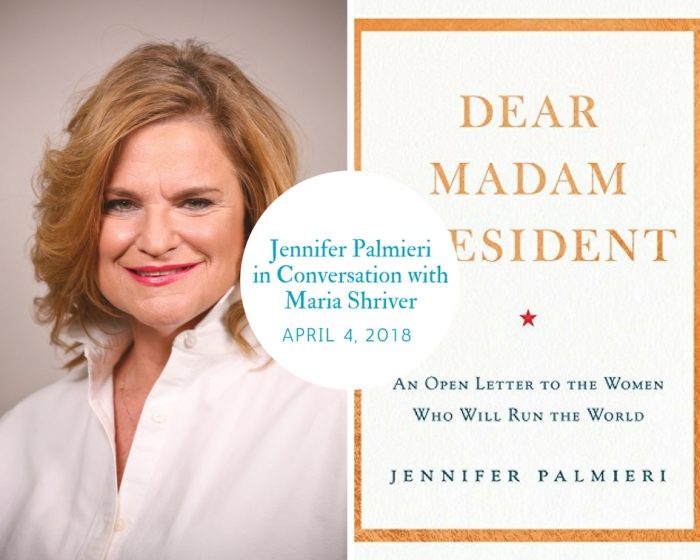 Tickets available at the door on the evening of the program. Cash or checks only.

Jennifer Palmieri is a name not all of us know. But as White House Communications Director for President Obama, and Director of Communications for Hillary Clinton’s 2016 presidential campaign, and working with Elizabeth Edwards before that, she understands the foundations and challenges of what it takes to run and to succeed in office. Her new book, Dear Madam President: An Open Letter to the Women Who Will Run the World, is just that: a slim volume of insight on her lessons learned while working for two of the most influential people in the country. Dear Madam President suggests that women must create a new model of leadership, one based on moving forward despite the unimaginable, despite the setbacks, and despite the haters. It is a letter for future women leaders to embrace their ambitions, to embrace their ambitions for public service, and to lead with heart, with intellect and with resolve to not see temporary loss as a defeat.

Maria Shriver, journalist, former First Lady of California, and activist for social good and social change, has created a new online series called Architects of Change. Its mission, in its own words, is “to inspire you to challenge what is, imagine what can be, then create what you envision. You can make a difference, play a part in moving humanity forward and ultimately, uniting it.” Maria’s expansion of the annual Women’s Conference created an opportunity for the women of southern California to hear national and international leaders in business, the arts, and politics. You can find more on Maria’s Architects of Change series by visiting Architects of Change.