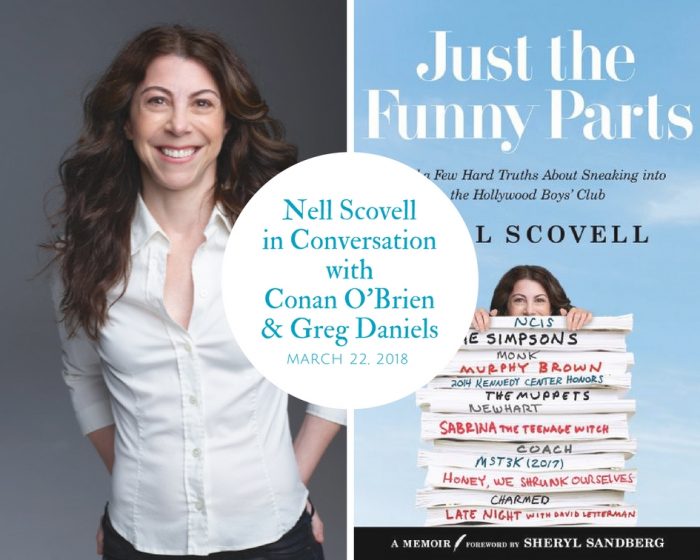 Who creates pop culture? That’s a very complex question, but whatever the answer is, Nell Scovell plays a significant part. Nell has written for Late Night With David Letterman, The Simpsons, Murphy Brown, NCIS, Monk, The White House Correspondents Dinner for President Obama, and created ABC’s Sabrina the Teenage Witch. She collaborated with Sheryl Sandberg on Lean In, and worked closely with many comic geniuses, including Larry David, Bette Midler, and Miss Piggy. In Just the Funny Parts, Nell Scovell looks back at a career in which she broke into the male-dominated comedy writers room again and again. Her stories are great, and she gives us much more than just the funny parts. The serious parts in her book resonate with everything we’re reading in the news now– from lack of diversity in the workplace to sexual misconduct.

In her first job at the long-forgotten late-night program, The Wilton North Report, Nell Scovell spent all her time in the office next door with a team of fresh-faced comedy writers: Conan O’Brien and Greg Daniels. She will be in conversation with Greg Daniels, who went on to co-create King of the Hill, The Office, and Parks and Recreation.

Also in conversation with Conan O’Brien, who has hosted his own talk shows for over 20 years. He is currently the host of Conan on TBS.

Tickets will also be available for purchase at the door.