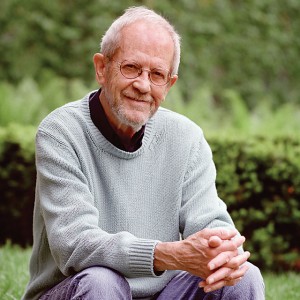 After some undignified bleating on my part, the folks at Elmore’s publisher, William Morrow, broke down.  And since I knew I had to do Elmore justice,  I asked the then editor of the Los Angeles Times Book Review, Steve Wasserman, if he had any ideas for a suitable moderator.  He reminded me that Martin Amis had reviewed a book of his a year or two before, and well, that could be fun.  It was enormously fun.  The hottest ticket in town, actually.  Martin Amis, the undisputed giant of contemporary British literature, seemed awed by Elmore.  And no wonder: he knew that he sat with a true master of American fiction, one who continually reinvented a genre and turned it on its head.  And on top of that, Elmore was the nicest, most unassuming guy on the planet.  Deadpan, hilarious, generous .  Kind, gracious, and terribly funny. His bad guys were bad but complicated, and sometimes they were so bad that if he killed them off in the end, we’d be sad to see them go.  His good guys were sort of bad too– sometimes straight from the slammer, or headed there at some point if they weren’t careful. And those who ended up in Elmore’s novels weren’t careful. No one could tell a story like him.

Elmore went on to do many programs, set up by his researcher, Gregg Sutter, who turned into a guardian angel of Writers Bloc.  Gregg made sure that Elmore did a Writers Bloc program whenever he could, and Gregg engineered it to reflect Elmore’s wishes and taste. The last program Elmore did with us was for his last novel, Raylan—part of his Justified work.  It was an intimate evening, at the lovely Museum of Television in Beverly Hills.  He talked about Justified with his friends Graham Yost and Timothy Olyphant from the show, and had old friends and family in the audience.  He was brilliant and funny, genuine and utterly straightforward.  One of the loveliest guys I’ve met in the many years of Writers Bloc.