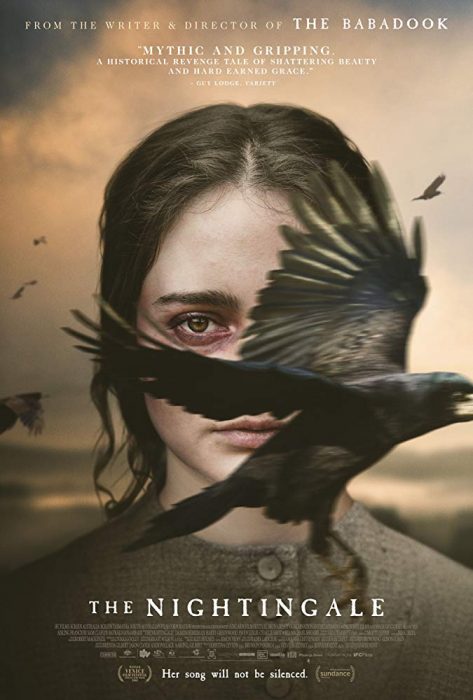 Set on the Australian island of Tasmania in the year 1825, The Nightingale addresses difficult subject matter by staring it squarely in the face. For some viewers, the film will prove too harrowing to watch.

Uncompromising in its depiction of sexual violence, racial bigotry and institutionalized cruelty, the film takes place fifty years after British explorer James Cook claimed the eastern shore of Australia for King and Country. British authorities wasted no time in establishing penal colonies to alleviate the overflowing prison population back home.

Twenty-one-year-old Irish native Clare Carroll (a raw, totally committed performance by Aisling Franciosi) has spent the last seven years as an indentured servant on the penal colony. Clare’s crime is never specified — it could have been as minor as stealing a loaf of bread — but Lieutenant Hawkins (Sam Claflin, chillingly effective in a rare, villainous role), who commands the naval barracks where she scrubs floors, chops wood, cooks, cleans and does laundry, refuses to release her, even though she has completed her sentence. Clare has a beautiful singing voice and Hawkins orders her to perform for him. He also routinely rapes her, a fact Clare keeps from her husband Aidan (Michael Sheasby), with whom she has an infant daughter.

In addition to overseeing the convicts, British troops keep the indigenous population in line – which means confiscating Aboriginal lands and eradicating as many natives as possible with an increasingly depraved zeal. For many Aboriginals, it is their first exposure to the white man.

When Hawkins’ request for a promotion is denied, he flies into a rage, abandons his post and, with two subordinates and an Aboriginal guide, heads to the next garrison, a three-day trek through thick, tangled forests. Before leaving, he stops at Clare’s cabin, leaving total carnage in his wake. Grief-stricken and intent on revenge, Clare hires an Aboriginal tracker named Billy (Baykali Ganambarr, terrific in his film debut) and pursues Hawkins.

One of the film’s most potent themes is the callous insensitivity of the British colonizers – not only towards the convicts and Aboriginals but also towards one another. There is a kind of hierarchy of discrimination, as the English officers debase and abuse the men under their command. Everyone serves as a whipping boy for somebody else. Such casual brutality becomes almost ingrained in the captors’ DNA, but it takes a spiritual toll on both the victims and the perpetrators.

Clare’s demeaning treatment of Billy echoes the prejudice and cruelty exhibited by the British. In her eyes Billy is inferior because he is black. She feels no shared humanity with him. Despite her verbal lashings and harsh treatment, however, Billy refuses to abandon Clare — as though kindness is an innate trait in him. Only gradually does Clare come to see Billy as a human being and protector.

The Nightingale also serves as an inquiry into the moral consequences and emotional costs of seeking vengeance. Killing one’s enemy does not bring back loved ones and punishment is often misplaced or inflicted on the wrong individual.

Writer/director Jennifer Kent (The Babadook) displays a sure grasp of narrative and coaxes outstanding performances from her actors. Instead of wide-screen lensing to capture the breathtaking beauty of Tasmania, she shoots in the boxy, 1.37 aspect ratio, heightening the sense of claustrophobia and hopelessness that entraps everybody.