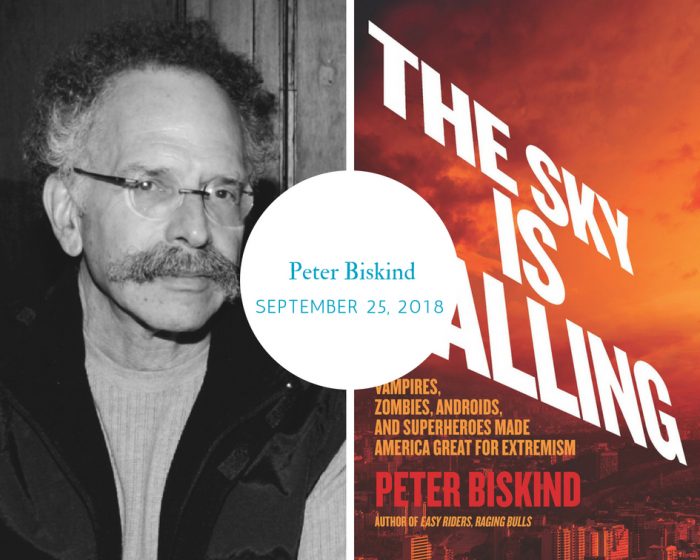 Really Special Deal! $38: 1 General Admission ticket with one copy of Peter Biskind’s The Sky is Falling: How Vampires, Zombies, Androids, and Superheroes Made America Great for Extremism.

What does pop culture have to do with the lack of common ground in Washington? What relationship does the blockbuster have with growing political extremism in our country and abroad? What do superhero action fantasies bearing little or no resemblance to reality have in common with the new ideological landscape of our country and others around the world? Peter Biskind, observer of all things related to film, argues that for the past several decades, both the left and the right have vaulted their themes into our culture, via movies and television shows featuring superheroes, super cops, super spies, and super robots to create us-against-them extremes. The X-Men and Dark Knight franchises, to name only two, not only resonate with, but have helped to create, the political conversation in America today. The mainstream, Biskind argues,of cops and robbers, doctors and patients, has been supplanted by fiery comic-book violence, or subtle ideological rhetoric and has put science, reason, goodness on the defensive.

The new mainstream in film and television, Biskind says, is extreme. Superheroes, he reminds us, come in all forms– Sandra Bullock’s gun-toting evangelical in her award-winning performance in The Blind Side, or Jack Bauer, the undisputed hero as outsider who saves the day, 24 hours at a time. Aliens among us are misunderstood– so our tv and movie culture seek to normalize the “freaks” among us, whoever we are. And this seeps into our view of the world, our behavior, as we try to defend ourselves against aliens or drug addicts, killer robots or poverty, and other assorted bad guys out to get us. Superman’s call for truth, justice, and the American way seems so quaint in today’s cultural mashup. (Peter Biskind is a contributing editor of Vanity Fair, and has written numerous books on culture and film.)

In conversation with Kim Masters. Known and admired for her keen insight into all things related to pop culture, Masters is the host of The Business on KCRW, and is an editor at large for The Hollywood Reporter.  She has won numerous prestigious awards, including Entertainment Journalist of the Year from the LA Press Club, and most recently she won the 2018 Distinguished Journalist Award from the Society of Professional Journalists.