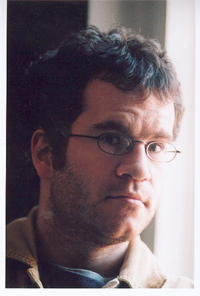 Tickets available only through Brown Paper Tickets. Tickets are $31 each. You may also call Brown Paper Tickets toll free at 1-800-838-3006. Unless otherwise noted, tickets may be available at the door on the night of the program. EACH TICKET INCLUDES A COPY OF NICK HORNBY’S BOOK, MORE BATHS LESS TALKING. HE WILL SIGN THE BOOKS AT THE PROGRAM.

High Fidelity. About A Boy. A Long Way Down. Nick Hornby’s novels are unquestionably hilarious, often terribly poignant, and always terrific, and they define a time and place in our literary era. Fever Pitch an absolute classic self portrait of an obsessed (really obsessed) sports fan. Let’s not forget that he wrote the screenplay to An Education, for which he was nominated for an Academy Award. His novels and his memoir, are in themselves wonderful experiences.

Authors often spend years writing novels. That’s no fun for his readers. But Nick Hornby makes the wait between novels easier: he writes a regular column in the magazine, The Believer. His columns in The Believer about books and cultural phenomena are for people who love to read, and who love to talk about the books they’ve read, and the ideas that spring from those books. Hornby’s latest book, More Baths Less Talking (Notes From the Reading Life of a Celebrated Author Locked in Battle with Football, Family, and Time Itself), is a compilation of his columns from The Believer, about books he’s bought and books he’s actually read. If you haven’t followed his pieces in The Believer, we suggest that you do so. If you haven’t, fear not: he’s done it for you. His short essays revolve around bookswhether they’re about Saturday Night Live, or by Patti Smith, or Keats’ letters. What makes Hornby’s book essays such essential reading is that they’re not reviews, they are musings about how some books fit so perfectly into our lives, and how they can remain with us as necessary intellectual companions for years and years. Hornby suggests that years on, we might recall how something from a certain book or poem or conversation sneakily inspired us in a much more profound way than we might have imagined.

Nick Hornby is an unabashed fan of pop culture. Tom Bissell lives and breathes it. He is an award-winning journalist and travel writer, an award-winning and much anthologized short story writer. Bissell is also the author of Speak, Commentary — a collection of fake DVD commentary for popular films, with fake contributions from political figures and lightening rod pundits such as Jerry Falwell, Ann Coulter, Noam Chomsky and others. Fans love Speak, Commentary for its relentless searing political and social satire. Tom Bissell also writes in defense of video games, and about his addiction to them.