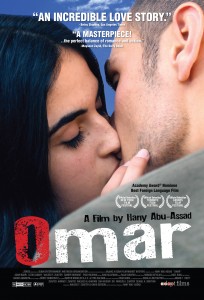 Sometimes there are no good choices. That is the dilemma confronting the hero of the gripping Palestinian drama Omar, who is arrested after a sniper kills an Israeli border guard. Omar (Adam Bakri, outstanding in his film debut) was not the shooter, but he knows who was, and that is reason enough for Israeli Security Forces officer Rami (Waleed Zuaiter, also excellent) to beat and torture the young Palestinian and threaten him with life imprisonment. His only chance of release is if he agrees to become an informant.

An Oscar® nominee for this year’s Best Foreign-Language Film (the film is in Arabic and Hebrew) –- and winner of the Un Certain Regard grand jury prize at last year’s Cannes Film Festival –- Omar is both love story and political thriller. Underlying both is the de-humanizing effect of living under Israeli occupation. Omar, Tarek (Eyad Hourani), and Amjad (Samer Bisharat) grew up together and remain close friends, despite the Israeli Separation Wall that now bisects their small community and forces Omar to risk his life every time he scales the wall to visit the other side. The real reason Omar is willing to expose himself to Israeli gunfire, however, is that he is in love with Tarek’s younger sister, Nadia (Leem Lubany) –- and she with him. But before asking for her hand in marriage, Omar feels he must prove his worthiness to Tarek. An opportunity arises when Tarek, the most politically radical of the three friends, pulls the other two men into the plot to kill the Israeli soldier.

The cat-and-mouse game that follows pits Omar against not only Rami — who sets Omar free with the implicit understanding that he will turn over the killer — but also against Omar’s own comrades in the Palestinian community, who suspect him of being a spy for the Israelis. Nor is the audience sure where Omar stands. Will he betray his friends or try and double-cross Rami? Responsible, decent and with the soul of a poet, the naïve Omar is no match for the lies, betrayals and manipulations he faces, some of which come not from the hated Israelis but from his own side.

The acting is good across the board, but it is Bakri and Zuaiter who totally command the screen. Political enemies who, in other circumstances, might have become friends, the two men are linked by mutual distrust and hostility, but also an almost grudging sense of respect. Writer/director Hany Abu-Assad, whose 2005 film Paradise Now was also nominated for an Academy Award®, keeps the tension high and the audience guessing, but also allows moments of humor and tenderness. There is a hint of West Side Story in Omar and Nadia’s love affair –- dreaming of a life that others, friends and foes alike, seem determined to deny them. But every aspect of this film must be seen in its larger context: the constant humiliation and degradation experienced by those living under occupation. Physical signs of beatings and torture may heal, but psychological and emotional damage never will.