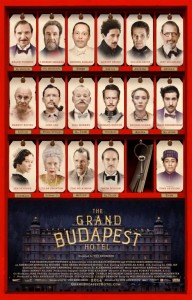 The Grand Budapest Hotel is grand indeed! The latest offering from idiosyncratic, man-child filmmaker Wes Anderson (Moonrise Kingdom) is also charming, delightful, eccentric, colorful, madcap, mournful, wistful, and even soulful. While the setting and storyline are completely different from the writer/director’s last picture, the film is infused with the same imaginative, storybook sensibility of Moonrise Kingdom.

The Grand Budapest Hotel is set in an imaginary country –- one that lies “on the farthest eastern boundary of the European continent.” While the story (actually, several stories within stories) shifts among different time periods, the main narrative takes place between the two World Wars, when old world virtues (i.e. aristocratic privileges) of elegance, opulence and sophistication were slowly eroding, driven in part by dark forces — Fascism and, later, Communism — gathering on the horizon.

Ralph Fiennes is absolute perfection as Monsieur Gustave H., the legendary concierge at the celebrated spa resort the Grand Budapest Hotel. A bon vivant, unfailingly polite and refined (albeit with a surprisingly vulgar streak), exacting in his attention to detail and demanding of his underlings, Gustave runs a tight ship that has helped steer the Grand Budapest to its world-class reputation. Needing an obedient and trustworthy ally and protégé, he takes the new, junior lobby boy, the marvelously-named Zero Moustafa (Tony Revolori in a promising acting debut), under his wing. A shy, unassuming young man, but honest, loyal and increasingly resourceful, Zero is a war orphan from some distant, unidentified Middle-Eastern conflict.

The film’s breathless, madcap air and clever, fast-paced dialogue are a perfect fit for a convoluted but consistently amusing plot that encompasses murder, mayhem, romance, a dowager’s contested will, a priceless painting, more murders, false imprisonment, a daring prison escape, and a hair-raising chase down the Alpine slopes –- all impeccably executed by Anderson and his long-time collaborators, cinematographer Robert Yeoman and production designer Adam Stockhausen. Composer Alexandre Desplat adds a zesty, appropriately Eastern European-flavored score and a toe-tapping number that accompanies the ending credits.

The enthusiastic cast includes an unrecognizable Tilda Swinton as an octogenarian dowager who, like so many of the hotel’s elderly female (and male) guests, is in love with the much younger, but always attentive and compliant, Gustave. F. Murray Abraham is heartbreakingly persuasive as a much older Zero, who relates the hotel’s history to guest (and film narrator) Jude Law and, in the process, relives his love affair with Agatha (Saoirse Ronan), the young pastry chef assistant. The one irritating element in the film is the preponderance of cameos by Anderson’s stock company of actors (and close friends): Bill Murray, Owen Wilson and Jason Schwartzman, to name just three. It’s simply too “inside;” they take you out of the movie. One suspects Anderson uses them rather like a security blanket –- just having them on the set offers him some degree of emotional support.

The film’s energy, high jinks and moments of arch humor are reminiscent of some of the funniest melodramas of the actual 1930s — think Hitchock’s The Lady Vanishes and Ernst Lubitsch’s Trouble in Paradise. But, in fact, Anderson and his films inhabit a universe of their own (some more successfully than others). His best films –- Rushmore, Moonrise Kingdom and The Grand Budapest Hotel –- share a zany humor, an underlying melancholy and recurring visual tropes that give his pictures their always distinctive look and feel: saturated colors; cleverly-conceived architecture to go with the intentionally artificial-looking sets; lengthy one-shots, with the camera moving vertically, horizontally and even diagonally, to keep pace with the characters as they move; and visual cross sections of interiors that add an element of choreography to the actors’ movements.

Despite the laugh-out-loud comedy that ripples through the film, there is an almost palpable sense of yearning underlying The Grand Budapest Hotel. It is more than mere nostalgia –- and it undoubtedly reveals more about Anderson than any film he has ever made.