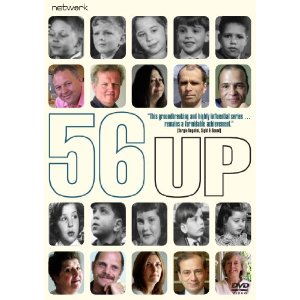 In 1964, Britain’s Granada Television embarked on a novel sociological study of England’s famously rigid class system. Conceived as a stand-alone TV documentary, Seven Up consisted of interviews with 14 seven-year olds from various socio-economic backgrounds. The question underlying the project was whether being born into a particular class shaped a child’s future prospects, whether by limiting or enhancing their opportunities throughout life.

John and Andrew came from privileged backgrounds and, at the age of seven, already knew where they would be going –- or, at least, were expected to go –- to prep school and university.  East End working-class kids Tony, Sue, Jackie and Lynn never even considered applying to college. One aspired to work at Woolworth’s; Tony, who became a cab driver, initially hoped to be a jockey.

Instead of a one-time special, Seven Up evolved into a series when, seven years after the initial program aired, Michael Apted, a researcher on the original project, picked up the directing and interviewing reins and revisited the original group of children, now 14 years old. Every seven years thereafter, Mr. Apted has checked in on the participants and, with camera in hand, asked them to reflect on their lives: have childhood hopes and dreams been realized; are they happy or disappointed with their lives, what type of adults have they become? The latest installment in the series, 56 Up, is just hitting American theatres. Remarkably, none of the original 14 participants has died in the nearly 50 years that have passed. Participation remains voluntary, however, and one, Charles Furneaux, dropped out after 21 Up, while Peter Davies, who sat out the last three films (35 Up, 42 Up and 49 Up) decided to return for this latest one.

Interestingly, the upper-crust individuals with the posh accents have always had a harder time opening up about themselves, even though they have been highly successful and, obviously, are very contented with their lives. The lower classes don’t seem to harbor any resentment towards those who started out with more and, consequently, have achieved more, even though government austerity cuts have made their lives dramatically more difficult. It’s safe to conclude that Britain’s class structure has remained remarkably intact –- without question, less upwardly mobile than American society. Nick, the farmers’ son who studied at Oxford and now teaches physics in the United States, would seem to be the exception, although his land-owning parents were decidedly middle-class and constantly pushed him to achieve.

You don’t have to have seen any of the previous films to enjoy 56 Up; each film works on its own (the reason behind the series is repeated at the start of every installment and excerpts from every documentary are included, so you see the participants at ages seven, 14, etc.). Faithful followers of the series will most likely be anxious to learn what has happened to Neil; certainly he the one who most tugs at this viewer’s heartstrings. An adorable, bright-eyed seven year old, he was homeless and suffering from mental illness by the age of 28. He seemed destined for failure and unhappiness, so it was surprising — and gratifying — to learn in 49 Up that he had achieved a small measure of success and some sense of self-worth, although clearly life remained a daily struggle for him. But what has happened to him since the last film?

Despite an impressive resume that includes the features Coal Miner’s Daughter, Gorillas in the Mist and The James Bond thriller, The World is not Enough, the Up series remains Michael Apted’s signature work. More than an unparalleled historical and sociological study, it is a totally engrossing, frequently moving human drama –- not only a look at other people’s lives but a mirror to hold up to our own.