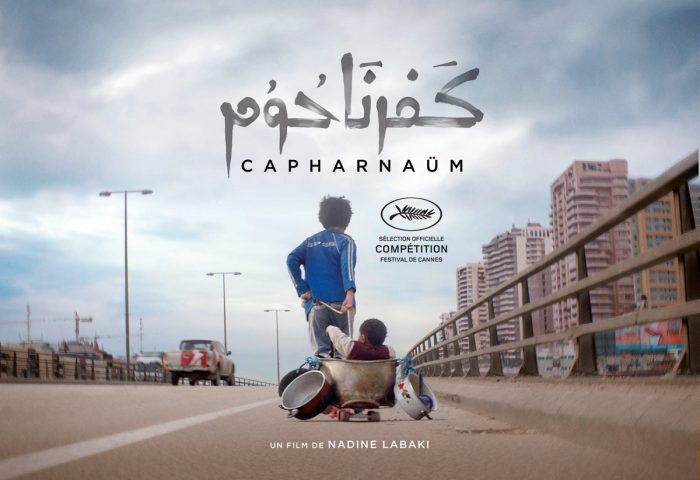 No film this year will move you as much as the Lebanese film Capernaum – and no film will haunt you in quite the same way. Winner of both the Grand Jury Prize and the Prize of the Ecumenical Jury at the 2018 Cannes Film Festival, Capernaum is the story of 12-year old street urchin Zain (newcomer Zain al Raffea who, like the rest of the cast, had never acted before) who sues his alternately abusive and neglectful parents in court for the crime of bringing him into a world where he has experienced nothing but suffering and misery.

Zain and his family are Syrian refugees who, like thousands of others, have fled to the relative safety of Beirut. So neglectful are the parents, Souad (Kawthar Al Haddad) and Selim (Fadi Kamel Youssef), that they never bothered to register their children’s births – leaving them without citizenship papers and, thus, no legal standing in the country. For Souad and Selim, children are born simply to be sold into marriage or to work and make money. They have already agreed to marry off Zain’s beloved, 11-year old sister Sahar (Cedra Izam) to Assaad, a grocer 20 years her senior, who, as part of the deal, allows the family to live rent-free in a squalid apartment building owned by his father.

Zain works from morning to night: off-loading merchandise from trucks, hauling heavy equipment across town, stocking grocery shelves, hawking vegetable juice on the streets, selling the drugs his mother obtains by forging prescriptions, and caring for his seven younger siblings. Thin as a rail, the malnourished Zain never smiles. His is a world of constant poverty, injustice and oppression. Although he remains defiant, dogged and resilient, his eyes betray an unrelenting sadness, a sense of resignation. His only moments of happiness are when he is with his sister Sahar. When she is forced into marriage, a distraught Zain runs away from home. After wandering for days he is taken in by Rahil (Yordanos Shiferaw) a kind Ethiopian refugee who faces her own uncertain future. She has no work permit and can be arrested and deported at any moment. She must hide her one-year-old baby Yonas while she labors as a janitor at an amusement park.

Zain starts taking care of Yonas while Rahil goes to work. She is a loving parent to her baby and to Zain. When she doesn’t come home from work one day, Zain feels too much responsibility to simply abandon Yonas. He goes in search of Rahil, carrying the baby with him.

Because most of the cast was illiterate, relying on a conventional script or shooting in a traditional manner was out of the question. Instead, Labaki would give a basic outline of each scene and ask her performers to simply use their own life experience as a guide, including improvising their dialogue and allowing them freedom of movement. The camera had to follow their lead and keep pace with their actions (the extraordinary cinematography was by German-Lebanese cameraman Christopher Aoun). The fact each person was playing a version of him or herself on screen was a key to their utterly convincing performances. The other key was the vision, dedication, patience, extraordinary talent and innate humanity of Labaki herself, who provided an environment of security, warmth and encouragement. “I threw my actors into a situation and then just captured them,” she says. (A more detailed interview with Labaki and her young star is forthcoming.)

A well-known actress in her native Lebanon, Labaki has, over the past decade, carved out an impressive career as a director and screenwriter. Her first two features, the well-received Caramel and Where Do We Go Now (both premiered at Cannes), were warm evocations of friendship and solidarity among women. Capernaum elevates her to a whole new level. Following in the humanist, neo-realistic tradition of the great Kurdish-Iranian director Bahman Ghobadi — whose debut film, A Time for Drunken Horses, also about impoverished, abandoned children, is one of the most emotionally devastating films ever made – Labaki presents a societal and political system that has utterly failed its most vulnerable members. Although the movie is set in a specific location, the problem it illuminates is world-wide: “how can we as a global society allow such injustice to happen?”