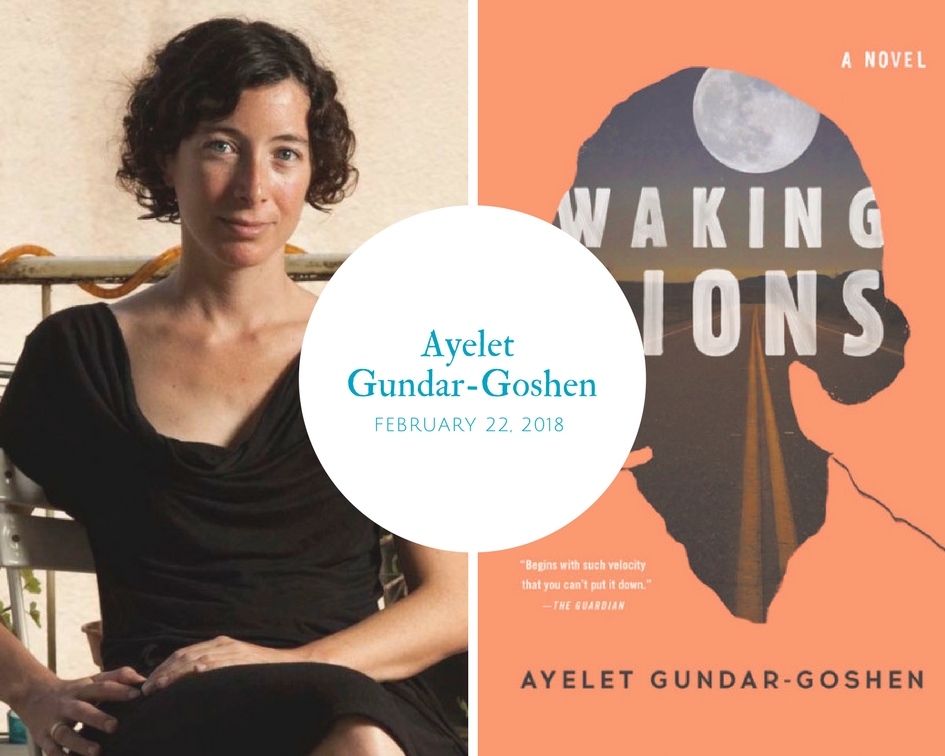 Acclaimed Israeli author Ayelet Gundar-Goshen will speak about her most recent work, Waking Lions, the winner of the 2017 Jewish Quarterly-Wingate Prize and one of the New York Times 100 Notable Books for 2017.

An Israeli doctor hits an Eritrean refugee and leaves him for dead on the side of the road. The next day, the refugee’s wife comes knocking on his door. This psychological thriller set in the Israeli desert – the ex-territory of the Israeli society and where the biblical exodus occurred – explores the clash between the privileged doctor and the unseen migrant in which the desert is not only a geography, but also a mental state of mind.

Ayelet Gundar-Goshen was born in Israel in 1982. Her first novel, One Night, Markovitch (2012), won the Sapir Prize in 2013 for debut novels. The Hebrew novel was translated into fourteen languages and also won the Italian Adei-Wizo Prize (Italy, 2016), which Gundar-Goshen shared with Etgar Keret, as well as the French Adei-Wizo Prize (Paris, 2017). The novel was also long-listed for the Italian Sinbad Prize and for the Grand prix des lectrices de Elle.

Gundar-Goshen’s second novel, Waking Lions (2014), was translated into thirteen languages. It won the 2017 Jewish Quarterly-Wingate Prize, which Gundar-Goshen shared with Philippe Sands. The New York Times picked i as one of its “100 Notable Books of 2017” and The Wall Street Journal included the novel on its “Best Summer Reads” list.

Gundar-Goshen also writes screenplays for TV and cinema in Israel. One of her short scripts – Batman at the Checkpoint – won the Berlin Today Award for the best short film on the Berlinale Talent Campus in 2012.

Gundar-Goshen is a regular contributor to BBC’s The Cultural Frontline and an occasional contributor to the Financial Times, Time Magazine and The Telegraph.

“Uncommonly complex, socially aware, and ethically ambiguous….plot is almost secondary to the political implications Gundar-Goshen explores – but what a plot it is, fuel for meditations on integrity and the layered guilt of the Israeli bourgeoisie.”
-Boris Kachka, New York “7 Books You Need to Read This February”

“Vividly imagined, clever, and morally ambiguous….[Waking Lions] is a smart and disturbing exploration of the high price of walking away, whether it be from a car accident or from one’s own politically unstable homeland.”
-Maureen Corrigan, National Public Radio’s “Fresh Air”

“Mesmerizing….Smoothly alternating points of view, it uses the format of a thriller to study the almost unbridgeable gap between insider and outsider. The complex relationships between Israelis, Bedouin Arabs, and Eritreans may be unique to Israel, but that social dynamic will reverberate meaningfully with U.S. readers as well.”
-Booklist (starred review)

“Why should Jewish immigrants enjoy immediate citizenship in Israel, while African immigrants are detained or deported? Of course, these problems are not unique to Israel. Exactly the same arguments over immigration, on a much larger scale, are dominating the politics of Europe and the United States. It is surely for this reason that Waking Lions, the new psychological thriller by Israeli novelist Ayelet Gundar-Goshen, has broken out to become a worldwide phenomenon.”
-Adam Kirsch, Tablet Magazine