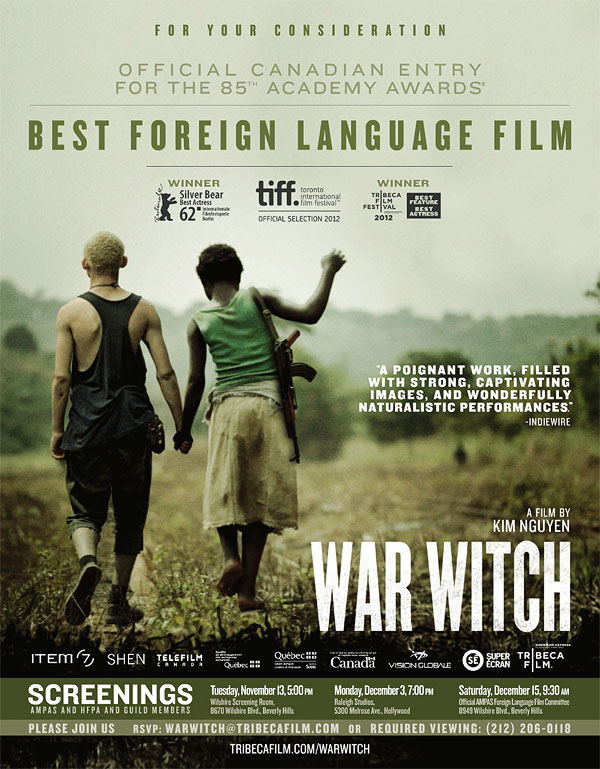 War Witch, one of the five recent Oscar nominees for Best Foreign-Language Film, has a reputation as a powerful but almost unbearably grim film. Is it difficult to watch?  At times, very much so, but don’t let that dissuade you. A story of human resilience in the face of terrible cruelty and sadness, War Witch is a remarkable film on every level: emotionally raw, profoundly moving, totally engrossing and superbly acted, shot and directed. First-time actress Rachel Mwanza gives an extraordinary performance as Komona, a 12-year old girl whose entire village is massacred by anti-government rebels, save a handful of children who are kidnapped and forced into becoming child soldiers. “I had to learn to make the tears go inside my head,” she says in voice-over narration, as any sign of weakness brings beatings from her captors. Haunted by the horrors she has witnessed –- she is given a choice between shooting her parents or watching them be hacked to death — she is visited by ghosts, who she believes are a punishment for the sins she has committed. But the spirits also protect her, warning her of nearby enemy forces. This seemingly supernatural gift earns her the protection of the rebel commander and the title of war witch.

While the story’s setting is never specified, the film was shot in the Democratic Republic of Congo, one of many African nations where children are conscripted into rebel militias (as well as into government armies). When 15-year old rebel Magician (Serge Kanyinda) falls in love with Komona and runs away with her, he brings tenderness, hope and happiness into her life. The idyll proves short-lived but is enough to give Komona a sense of peace and self-worth.

Mwanza, who walked away with the Best Actress Prize at the Berlin International Film Festival, exudes both vulnerability and toughness. She was discovered living on the streets of Kinshasa by Vietnamese-born, Montreal-based director Kim Nguyen. Her talent is as raw and natural as that of Quevanzhane´ Wallis, the gifted child who made her acting debut in Beasts of the Southern Wild. Also outstanding is Serge Kanyinda who, like Mwanza, had never acted before. Director of photography Nicolas Bolduc’s hand-held camera work follows the emotional contours of the story as if navigating the bends of a river. Even when placing viewers in the middle of fast-moving action, the camera remains remarkably unobtrusive, avoiding the kinetic, shaky-cam trap. Bolduc deservedly won top prize at the 2012 Camerimage for his work.