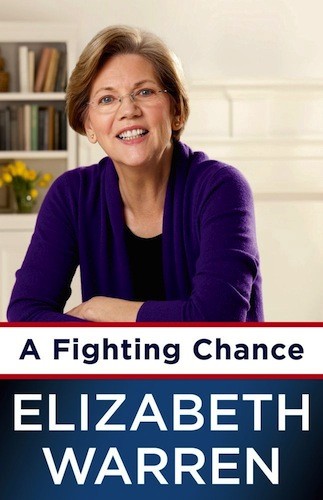 A “Sheriff of Wall Street” and a hero to many, Senator Elizabeth Warren’s story (A Fighting Chance) is about a woman whose American Dream hopes to pay it forward for generations to come.

This event will provide an insightful portrait of Senator Warren’s personal life – a life filled with passion and laughter, with losses and learning. From her early fights on behalf of her own family to her fearless advocacy for other families, Elizabeth Warren’s presentation will show how she is engaged in a tireless fight to bring out the best in our country and help discover how we build opportunities for all our children.

Washington works for those who can hire an army of lawyers and lobbyists, but it’s not working for America’s middle class.

Senator Elizabeth Warren believes that the system is rigged against working families, so she went to Washington to fight, and what a fight it’s been. While she’s felt the wrath of Wall Street and of the financial industry, she gained the love and respect from Americans who appreciate her tooth and nail combat for millions of people who are just one illness, divorce or job loss away from financial ruin. Senator Warren is not only one of our nation’s most influential women, the leading consumer protection advocate, and one of the foremost experts in bankruptcy in the country, but she is also the new Senior Senator from Massachusetts.

In her funny, rabble-rousing new book, A Fighting Chance, Warren talks about her remarkable story, from a struggling middle class family in Oklahoma, to a wife and mother by 22, to Professor of Law at Harvard University, and to Senior Senator from Massachusetts. This is her story— entirely conversational and full of humor— about family, elections, and her vision for giving every kid a fighting chance to succeed.

Launched into the national conversation about personal finance years before the 2008 financial crisis, Senator Warren’s outspoken leadership and advocacy led to the creation of the United States Consumer Financial Protection Bureau to get the tricks and traps out of mortgages, credit cards, student loans and other financial services. In the aftermath of the 2008 financial meltdown, Warren served as Chair of the Congressional Oversight Panel to oversee the Troubled Asset Relief Program (TARP) to protect taxpayers and hold Wall Street accountable. She ran against Senator Scott Brown in 2011 for the seat held for decades by Teddy Kennedy, and in 2012 was elected the first woman United States Senator from Massachusetts. She is a rabble-rouser and one of the more inspirational women leaders in the country today.

Directions to the Wadsworth Theatre on the West Los Angeles VA Campus:

If you are traveling east on Wilshire Blvd., you will exit Wilshire Blvd to the right at the Wadsworth Theatre/VA Hospital sign and travel down to the first stop sign. Turn left onto Bonsall Avenue, travel under Wilshire Blvd. At the second stop sign Turn left onto Eisenhower Avenue and turn left to park as directed by parking attendants.