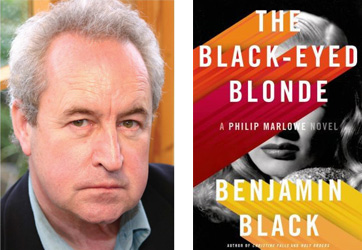 If you are under the impression that Raymond Chandler is dead, you are wrong. Dead wrong. Philip Marlowe copycats abound. Raymond Chandler imitators hide in every beer joint in LA. But we finally have a new Marlowe, one who is worthy of the original’s creator. Our recent and best incarnation of Philip Marlowe is by none other than Dublin writer Benjamin Black, author of the Quirke series of postwar mysteries set in Dublin. The Quirke novels are wonderful, inducing withdrawal from readers when we finish that last page.  Of course they’re wonderful—Benjamin Black is the nom de plume for The Man Booker Prize winner John Banville, considered to be one of the best writers in Ireland.

Psychologically intense, rich in period and personal detail, and swathed in memory and regret about the past, Benjamin Black’s books owe an enormous debt to Black’s alter ego, Banville. But Benjamin Black’s books are distinct from Banville’s in that the mysteries are tremendously fun while exploring serious issues which can be painful and difficult. While the Banville novels are magnificent, it’s the Benjamin Black books that reveal what fun he has.

In Black’s new book, The Black-Eyed Blonde, Philip Marlowe resurfaces so clearly, so visibly,  that you can feel his alienation at the wealthy heiress’ mansion on the beach. You are dropped straight into old LA’s Barney’s Beanery, where Marlowe fishes for information about the blonde’s missing boyfriend. The story: a guy goes missing. The wealthy blonde girlfriend wants to find him. But of course that’s only the very first part of the tale. It’s in the complications, the nature of the character and the conflict that we realize that Benjamin Black’s great Dublin character, Quirke, is not unlike Raymond Chandler’s rumpled Los Angeles Marlowe. In Black’s most capable hands, our Marlowe lives and breathes as if Raymond Chandler himself willed him to life. Being a Dubliner, Black alludes to Dublin and to Ireland, lending authenticity to his re-creation. Philip Marlowe has finally met his dopelganger.