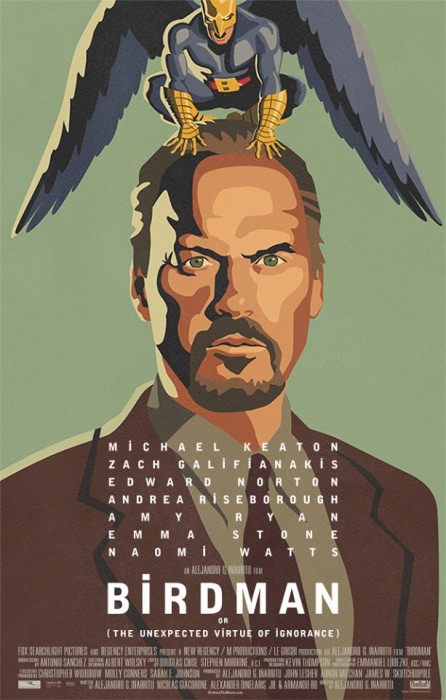 Birdman or (The Unexpected Virtue of Ignorance) is an artistic and technical tour de force –- a marvel of conception, technical execution and acting. Explosively funny and unexpectedly thought-provoking, it spins a darkly humorous web that, upon closer examination, contains as much tragedy as comedy. Michael Keaton gives the performance of his career as Riggan Thomson, a former movie star whose fame rests on a series of Hollywood blockbusters in which he portrayed a masked, crime-fighting superhero. To try and recapture his past glory –- and earn respect as a “serious” actor –- Riggan decides to adapt, direct and star in a Broadway production of a Raymond Carver short story. As opening night approaches and both personal and professional pressures mount, Riggan experiences a total mental meltdown.

The film was conceived as one, long, uninterrupted shot as a way of immersing the audience in Riggan’s world. It actually consists of a series of lengthy scenes, but so seamlessly are they edited together that the illusion of a single, continuous shot is maintained, achieving director/co-writer Alejandro G. Inarritu’s intent. Cinematographer Emmanuel Lubezki’s roving camera glides between Riggan’s point of view and shots in which the character is part of the action. Even then we feel we are inside Riggan’s head as, like a steel ball careening down a pinball machine, his expression ricochets between hope and despair; narcissism and self-doubt; hubris, panic, denial and resignation. Keaton gets superb support from his fellow cast members –- including Edward Norton, Naomi Watts, Zach Galifianakis and Andrea Riseborough — with special kudos reserved for Emma Stone as his rehabbing daughter and backstage assistant, whose no-holds-barred rant about her father’s irrelevancy is an absolute stunner.

The comedy never flags, but it’s the script’s surprising emotional and psychological undercurrents that give the film its tension and depth. A gifted director of dramas, with a penchant for characters at their most emotionally vulnerable (Amores Perros, 21 Grams, Babel, Biutiful), Inarritu has pushed himself in a new direction here. No less than his protagonist, he is attempting a high-wire act without a net. It’s a bold leap –- and he soars.