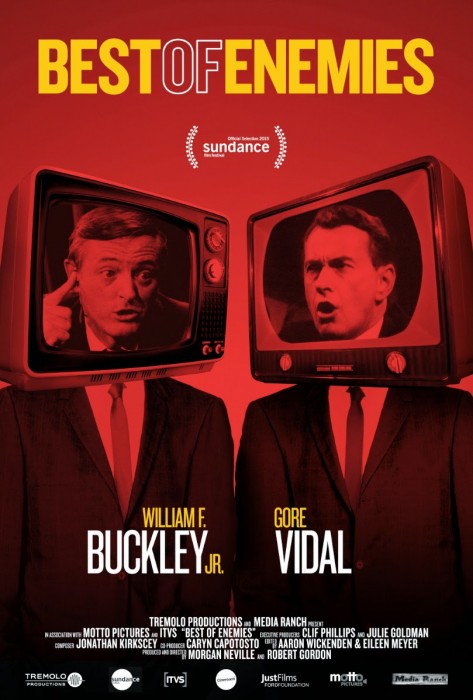 Their political ideologies, moral values and visions for America were completely antithetical, but it was the startling similarities in their personalities that should have horrified both William F. Buckley, Jr. and Gore Vidal. Buckley, the preeminent voice of modern American Conservatism, and Vidal, the acerbic, sybaritic, cultural and political gadfly of the Left were both brilliant intellectuals: erudite, witty, articulate, prolific novelists and essayists, and supremely self-confident. But they also shared less admirable traits: arrogance, smugness, narcissism and pomposity –- all of which are on display in the marvelous documentary Best of Enemies.

The two men openly loathed one another, but they were forced to share the stage for 15 minutes every night over the ten nights of the 1968 Republican and Democratic presidential conventions, thanks to a bit of stunt casting by ABC News, which hoped a debate not just between such radically opposing viewpoints but also by two towering intellectuals whose mutual enmity was well-known, might help elevate the network’s abysmally low ratings. It worked, but not even ABC News could have predicted just how vicious and vitriolic the conversation would turn. (Buckley was asked if there was anybody he wouldn’t appear with on stage. His reply: “I would refuse to go on with a Communist. The only other one I can think of is Gore Vidal.” ABC immediately approached Vidal.)

While CBS and NBC provided gavel-to-gavel coverage of the conventions, ABC televised just a couple of hours a night –- still live, of course. Buckley and Vidal were part of each night’s coverage. Moderator Howard K. Smith gamely explained that the purpose of the debates was to assess the platforms and positions of each party, but his comments fell on deaf ears. As soon as the two political pundits opened their mouths, the discussion became an open assault on the other’s beliefs –- and a veiled attack on their very different lifestyles. At heart Buckley considered Vidal a moral degenerate and a danger to American values. Vidal saw Buckley as anti-democratic and equally dangerous to the fabric of the nation.

Like all news operations, ABC made an “aircheck” of each night’s broadcast –- i.e. a copy recorded directly off the air, exactly as the show went out over the airwaves. Documentary filmmakers Morgan Neville and Robert Gordon separately stumbled upon recordings and decided to pool their talents and make a documentary about the debates, the two participants, and the impact the directors believe the debates had on political discourse in the United States.

The film does not take sides and is not concerned with who “won” the debates. Neville and Gordon’s focus is on how the explosive exchanges between Buckley and Vidal — which, at one point, came perilously close to physical blows — marked the beginning of a steady decline in how news is covered and presented. Although exceptions exist –- primarily PBS and NPR — today’s media landscape has changed significantly –- and not for the better. Civility has flown out the window, along with the concept of balanced reporting. Cable news channels proudly operate from narrow political and cultural biases. Even the definition of “news” has proven distressingly elastic.

The documentary includes pertinent and entertaining commentary from a variety of individuals, including the former heads of NBC and ABC News, biographers of Vidal and Buckley, and Buckley’s highly amusing brother Reid, whose angular nose, sparkling blue eyes and mischievous smile were almost a mirror image of his brother’s. Still, the filmmakers do not make an entirely persuasive case because they fail to mention other factors that have contributed to the decline in political discourse in both the media and general population. The growing political divide in the United States, the lack of respect for other opinions, the unwillingness to even listen to differing viewpoints, the networks’ obsession with ratings and an increasingly celebrity-driven society would have developed even without the Buckley-Vidal debates.

Best of Enemies is a must-see for anyone interested in American politics, culture, the media and public discourse. At once highly entertaining and deeply depressing, the documentary ends on a note not necessarily intended by the filmmakers: the viewer comes away feeling unexpected sympathy for Buckley, who was haunted for the rest of his life by his own lapse in civility on the air. When Vidal laughing referred to him as a “crypto-Nazi,” Buckley completely lost his cool and called Vidal a “queer.” The glee in Vidal’s eyes at getting his nemesis to expose his true feelings, and the hatred that flickered across Buckley’s face, immediately followed by a look of mortification, are astonishing to witness.