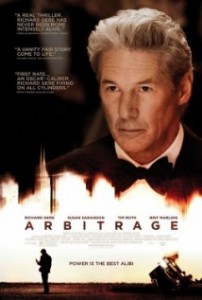 Film Critic Jean Oppenheimer writes about films of interest to our audience.

Arbitrage introduces us to a man who seemingly has everything–-then sits back and watches as his charmed life runs off the rails. Set in the world of high finance (what, another movie about corporate greed and corruption?!), this taut, thoroughly engrossing suspense thriller is far more concerned with the psychological complexity of its central character (Richard Gere, in top form) than in the financial shenanigans that land him in hot water.  In fact, one of the film’s great strengths is that writer/director Nicholas Jarecki isn’t interested in playing the “is he a good guy or a bad guy” game, in which guessing the answer is all that drives the story.

The plot in brief: a risky investment goes south, forcing hedge fund magnate Robert Miller (Gere) to borrow to cover his losses. If he can sell his trading empire to an already interested banker in time, everything will be fine and nobody will be the wiser. But the banker is dragging his feet and Robert’s creditors are losing patience. And that’s merely act one! Act two adds a mistress, a car crash, and a dogged police lieutenant (Tim Roth). Suddenly, Miller’s perfect life is spiraling out of control.

If the film sounds plot-heavy (there is a third, related subplot), the various story threads are woven together skillfully enough to keep the movie from ever feeling overly busy or sinking into melodrama. Gere is in almost every scene and he doesn’t make a false move. It is one of his best performances and he gets stellar support from Susan Sarandon as his wife, Brit Marling as his daughter, and Nate Parker as a young man Miller threatens to drag down with him.

And while on the subject of high finance and corporate malfeasance, if you have never seen Margin Call, rent it.