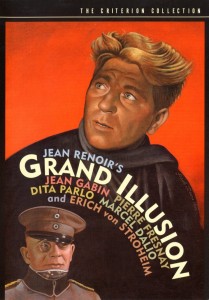 Writers Bloc is delighted to host reviews by film critic Jean Oppenheimer, who writes about films of interest to our audience.

Grand Illusion, Jean Renoir’s great, pacifist film of 1937, isn’t just one of the most outstanding anti-war films ever made; it is one of the best films ever made — a work whose beauty lies in the quiet and quietly transcendent sense of humanity that infuses it. This year, the movie’s 75th anniversary, is being celebrated with the release of a beautiful new print. There was an earlier restoration in 2000 but this new, digitally restored version was made from a recently unearthed camera negative, making it as sharp and pristine as when first released

Set during the First World War –- and made while a second one loomed on the horizon –- Grand Illusion concerns a group of French airmen taken prisoner by the Germans. The captured men include Lt. Marechal (Jean Gabin), a mechanic before the war; Capt. De Boeldieu (Pierre Fresnay), an upper-class career officer; and, later in the film, Rosenthal (Marcel Dalio), the scion of a wealthy Jewish banking family. In civilian life, these men’s paths would never have crossed; the upper classes did not mingle with those in a lower social group and, given the rampant anti-Semitism of the day, no one would have associated with Jews. But war is a great equalizer and the prisoners share quarters without regard to social rank. World War I, in particular, produced a seismic shift in the prevailing social order, sounding the death knell for the old European aristocracy (as fans of PBS’ Downtown Abbey are learning). De Boeldieu has more in common with the courtly Captain von Rauffenstein (Erich von Stroheim), the German flying ace responsible for their capture and who later serves as the prison’s commandant, than he does with the Marechals and Rosenthals who share his cell.

The film’s ability to touch an audience emotionally has not diminished with the years, nor has its ability to entertain. It is a film of tremendous depth and spirit, yet structured and told simply. It offers moments of unexpected humor and moments of great pathos. The acting is flawless, with a special nod to von Stroheim for the enormous empathy he creates. There are no villains in Grand Illusion, save war itself.