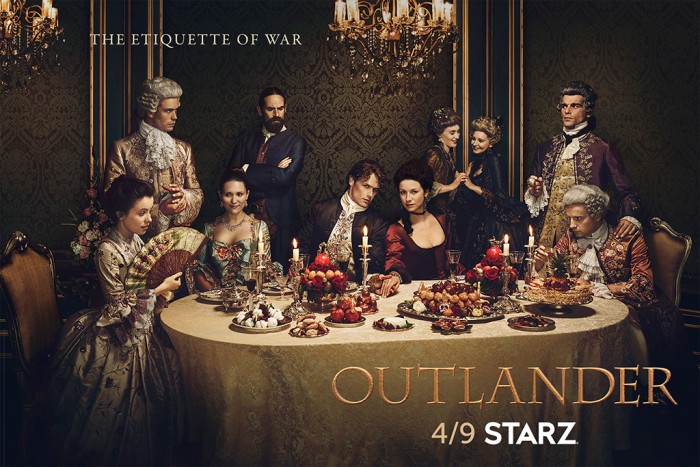 Buy Tickets Here. Thanks to Starz for their sponsorship, tickets are $10.

It is the dawn of Season 2. It’s difficult to imagine historical fiction that is as much fun as Diana Gabaldon’s addictive series, Outlander. And even in today’s landscape of absolutely terrific television, it is impossible to imagine a more combustible cocktail of love story, historical fiction, adventure, and just great storytelling.

Outlander Season 1 started us out comfortably enough in post WWII London, and dropped us into mid-18th Century Scotland. Our war-weary nurse Claire Randall and her husband, history scholar Frank Randall, enjoy a second honeymoon of sorts in the Scottish Highlands. Exploring the Highlands on her own, Claire touches a boulder, known for its mythical and mystical qualities. Before we can down a wee dram of Scotch or fasten our kilts, Outlander careens us from 1945 to 1743.

What a difference a few centuries make! A beautiful young woman wandering alone in the Highlands spells danger, drama, and opportunity for adventure. And if youve been fortunate enough to read Gabaldon’s first book in the series, or see Season One of Outlander, adventure comes in oh so many shapes, but primarily in the matinee-idol form of Jamie.

This Starz television adaptation of Gabaldon’s series, stays faithful to the literature and makes 18th Century Scotland bloom in the best– and sometimes darkest– possible ways. Our brave, lusty nurse Claire finds herself the handsomest guy in 1743 Scotland but she is married to 20th Century Frank. Consider the obstacles Claire must face in 1743: for her vast command of modern medicine, she would be burned as a witch. And her intellectual, independent spirit must somehow knock itself to a simmer in the face of the sexist and patriarchal culture that surrounds her. Claire knows what will happen to her 18th Century friends and neighbors. But living by historical knowledge is not so easy when she is trying to survive from one moment to the next, moving from villains and danger with aplomb. Participants in Survivor never had it so tough. Claire’s dilemma is to somehow return to 1945, to her stable and serious husband Frank. But returning to somewhere requires leaving from somewhere: so is leaving Jamie, that handsomest guy in 18th Century Scotland, something she can do? Before she can leave Jamie, she must try to change the course of history.

Join us for a wonderful evening with these actors and writers from Outlander as we prepare for Season 2, which removes us to France: