Jonathan Lethem’s award-winning novel, Motherless Brooklyn, turned Lethem into one of America’s most beloved novelists.  But what kind of novelist, exactly? After careening through Motherless Brooklyn, we sat and wondered at what we had read: a detective novel, a literary novel, a noisy and fabulous character study, and a wild elegy to urban America, specifically Brooklyn. As we marveled at A Fortress of Solitude, we knew we found the guy who could sing Brooklyn’s soul.  As we move to his new novel, A Gambler’s Anatomy, Lethem drops us into the world of an international backgammon hustler, whose wins seem to be outnumbered by a dispiriting run of losses. Our hero believes he’s got a psychic gift. But he’s also got a fast-growing blot on his face that threatens his life. Perhaps a visit to Berkeley can help his condition. A Gambler’s Anatomy is such great fun– as it toys with our notions of fate, luck and of course, self-awareness.

David Ulin knows a thing or two about conveying the soul of a city through literature.  He is the former book editor for the Los Angeles Times, the author and editor of so many books, including Writing Los Angeles; The Lost Art of Reading; and Sidewalking: Coming to Terms with Los Angeles. 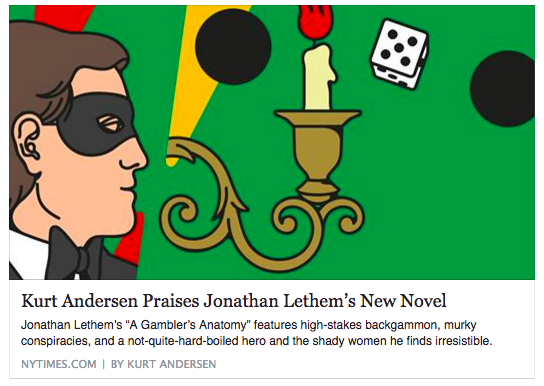