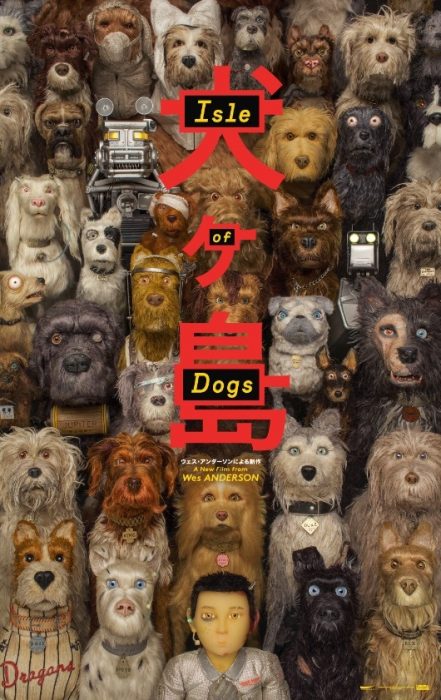 Idiosyncratic writer/director Wes Anderson has pulled a rabbit out of his hat yet again – perhaps the wrong metaphor, given that the irresistibly captivating Isle of Dogs is, as the title suggests, a film about man’s best friend. That dog spelled backwards is god will not be lost on Sirius lovers of canines (no more puns – promise!) but even those whose affection for dogs is limited will appreciate the wit, imagination and humor at play in Isle of Dogs, a stop-motion animated film that combines computer-generated and hand-drawn animation; stop-motion photography and puppets.

The story is set in the fictional Japanese city of Megasaki, where dogs roamed freely for centuries before becoming loyal, domesticated pets. When a mysterious canine flu sweeps the country, autocratic mayor Kobayashi (voiced by Kunichi Nomura, one of the film’s co-writers) uses it as an excuse to exile all dogs to Trash Island, a toxic waste site turned city dump. The first to be expelled is Spots (Liev Schreiber), beloved companion of Kobayashi’s 12-year old nephew and ward Atari (Koyu Rakin).

Determined to find Spots, Atari commandeers a single propeller airplane and flies to Trash Island, where the inexperienced, young pilot executes a less-than-graceful crash-landing. There he befriends a pack of dogs who, despite the language barrier – the dogs speak English while Atari and the other human characters speak in un-subtitled Japanese – surmise his intent and escort him around the island in search of Spots. The pack’s nominal leader is the distrustful “stray” Chief (Bryan Cranston), whose gruff manner and matted appearance mask a surprising degree of existential introspection.

Back in Megasaki, a contingent of what appears to be junior-high schoolers, led by American exchange student Tracy (Greta Gerwig), stages a series of sit-ins and rallies, demanding an end to the ban and the return of the dogs. Kobayashi and his henchmen attempt to shut down the protest movement.

With their shaggy coats and expressive eyes, dogs make for soulful protagonists, although it is the excellent voice work that gives each mutt his or her personality. Clever dialogue abounds. The back-and-forth banter between Chief and Nutmeg (Scarlett Johansson) is reminiscent of the slow burn exchanges between Bogart and Bacall. In fact, the film reveals an eclectic mix of influences, from revered Japanese filmmakers Yasujiro Ozu and Akira Kurosawa to Antoine de Saint- Exupéry’s The Little Prince to Walt Disney’s Lady and the Tramp.

Anderson favors long tracking shots and lengthy ‘oners’ (scenes played out in one long take, rather than edited into multiple shots); they are a hallmark of his live-action films but not usually thought of in the context of stop-motion. He also has a unique eye for physical and architectural environments, which become characters in their own right.

Anderson’s films always seem the work of a highly precocious child. While the quality of his work varies, his best pictures – Isle of Dogs, The Grand Budapest Hotel, Moonrise Kingdom and Rushmore – share a relaxed, infectious loopiness, underlaid with a sense of melancholy and wistfulness. Winner of the Best Director award at the recent Berlin Film Festival, he rarely ventures outside these parameters, yet he somehow manages to make each film feel fresh and novel. He is one of the few American filmmakers working today who merits the appellation “auteur.”

While not intended as a message movie, Isle of Dogs has a lot to say about the many issues facing today’s world: political corruption, propaganda and disinformation, the importance of science, the fate of the earth. The movie is also relevant in ways the filmmakers never could have anticipated, touching upon forced immigration, media manipulation by government officials, and the younger generation’s refusal to accept the status quo, stepping in when their fearful, complacent or unimaginative elders fail to lead.