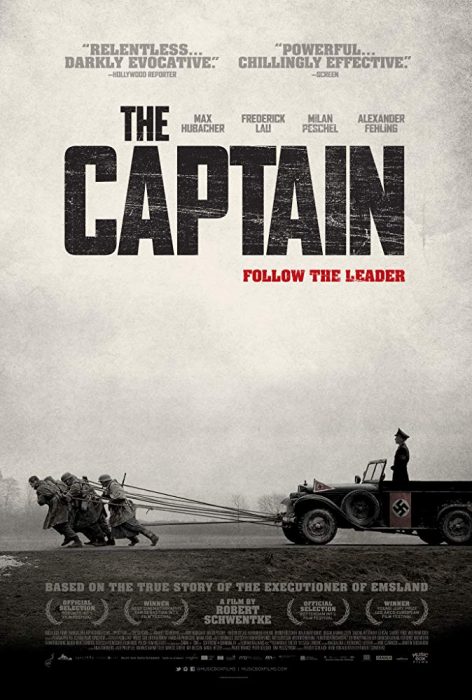 The German film The Captain would have worked just fine as a fable — a chilling one, to be sure, about how easily human beings can shed their humanity, discard all vestiges of decency and moral judgement, and engage in acts of unconscionable cruelty. As the story grows darker and increasingly unsettling, it takes on an oddly absurdist tone that seems to support the notion it is intended as a parable — a warning, a lesson — about how quickly a seemingly ordinary individual can become intoxicated with and corrupted by power, and how willingly, even eagerly, others will follow him. Part historical drama, part sociological study, part absurdist comedy, The Captain saves its most devastating indictment until a final postscript.

Set in Germany in 1945, during the final weeks of World War II, The Captain has nothing to do with the Holocaust. Written and directed by German-born Robert Schwentke — better known for his American work: Insurgent, Allegiant, Red, The Time Traveler’s Wife — the movie is unlike anything the filmmaker has done before. Our first image is of a vast, rural wasteland, covered with a smattering of late Spring snow, and a man running for his life, trying to escape a zig-zagging jeep filled with drunken Nazis who are shooting at him. The unlucky target is 17-year old Willi Herold, a Wehrmacht infantryman who either deserted or got separated from his unit.  It makes no difference to the officers; they are on a joy-riding killing spree.

The jeep can’t follow him through a thicket of trees and he staggers through the underbrush until he comes to a road where an abandoned vehicle sits. On the back seat he discovers a captain’s uniform and puts it on – more for warmth than anything else.  An equally disheveled soldier walks by and, assuming Willi is a captain, salutes and offers to be his aide-de-camp.  Other soldiers show up and challenge Willi, who bluffs his way through, convincing the men he is on a personal mission from the Fuhrer to find and kill army deserters. They join his “unit.”

Emboldened by the uniform, and the respect and fear it commands, Willi assumes the belligerent, sadistic behavior of the officers he has served under. When the small entourage gets to the next town, a man accused of stealing food is brought before him.  Willi pulls out the captain’s gun and shoots the thief at point-blank range.

Willi is then taken to a detention camp for German deserters. A real captain recognizes his face but can’t remember from where. In fact, he was one of the drunken Nazis trying to kill Willi in the film’s opening sequence. Willi takes charge of the camp, challenging and threatening anybody who asks to see his orders. Nobody wants to get on the wrong side of a “captain” – even a possible imposter – who says he is on a special mission for the Fuhrer. Like sheep, they do whatever he orders them to do, some out of fear but most because it allows them to indulge their own murderous impulses.

The film brings to mind the infamous social-psychology experiments conducted by Stanley Milgram at Yale University in 1961 and Philip Zimbardo at Stanford in 1971. Both explored the psychological effects of “perceived power” — the willingness of seemingly ordinary, upstanding individuals to disregard his or her own sense of right and wrong when told by an “authority figure” to do something that is clearly unethical or cruel.

Tonally, this peculiar story, with its escalating barbarism and almost burlesque absurdity, brings to mind The Tin Drum, although it is neither as frenetic nor as outlandishly comic as that film. Special mention must be made of cinematographer Florian Ballhaus’ stunning wide-screen lensing and the muted use of black-and-white – no stark whites or saturated blacks, just various shades of gray (to avoid the rivers of red blood that would prove too off-putting or distracting for viewers).

The Captain is not an easy film to watch. Twenty-four hours after seeing it, I am still in a state of shock. The events portrayed do not bode well for today’s world – nor for the future.  How much more comforting it would be were The Captain simply a fable. If only…