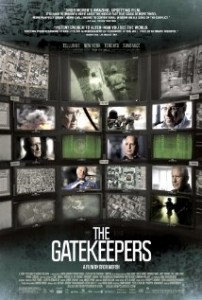 The Gatekeepers is one of the most remarkable and important films ever made about the Israeli-Palestinian conflict. Israeli director Dror Moreh’s riveting documentary looks at the long-running dispute through the eyes of six individuals whose authoritative views and voices are unimpeachable: the six men who led the nation’s domestic intelligence service, Shin Bet (akin to America’s FBI), from 1980 to 2011. The significance and power of The Gatekeepers, therefore, lies not only in the message being communicated but also in who the messengers are.

While many Americans have heard of Mossad (Israel’s CIA), thanks to such daring missions as the 1960 kidnapping of Nazi war criminal Adolph Eichmann, Shin Bet operates deeper under the radar. The fact that the six, surviving former heads of the internal security agency were each willing to be interviewed — separately and on camera — makes this an unparalleled and irrefutable document. While the six men have divergent views on some matters, all of them believe that Israel has been sowing the seeds of its own destruction with its continued occupation of the West Bank and Gaza.

“We are making millions of lives unbearable,” declares Carmi Gillon, who led Shin Bet from 1994 to 1996. Avraham Shalom, who held the post from 1980 to 1986, acknowledges, “We have become cruel.” One of the most impassioned speakers is Ami Ayalon, who headed the agency from 1996 to 2000, and who emphasizes the crippling moral cost Israeli attitudes and actions have taken on the Jews themselves.

Moreh recounts the history of Israel through voluminous archival footage. Shin Bet was formed in the wake of the 1967 Arab-Israeli War (aka the Six-Day War), when the victorious Israelis suddenly found themselves administering new territories and the more than one million Palestinians who lived on the land. Over the years Shin Bet has had to expand its duties to include plots and attacks by ultra-religious Jewish citizens, such as the scheme to blow up the Dome of the Rock in Jerusalem, one of Islam’s holiest sites. It was a right wing, Orthodox Jew who assassinated Yitzhak Rabin in 1995, the one (some would say “only”) Prime Minister who ever seemed truly committed to achieving a fair and lasting accord with the Palestinians.

One of the five nominees for this year’s Best Documentary Academy Award, The Gatekeepers is an invaluable work. The amazingly candid testimony of the six veterans (all of whom admit having blood on their own hands) and the conclusions drawn by them concerning Israel’s responsibility in the continuing discord, simply cannot be ignored. Israel isn’t the only trouble spot in the Middle East today, but it remains the longest running –- and perhaps the most intractable and unyielding. The Gatekeepers hopes to change that.