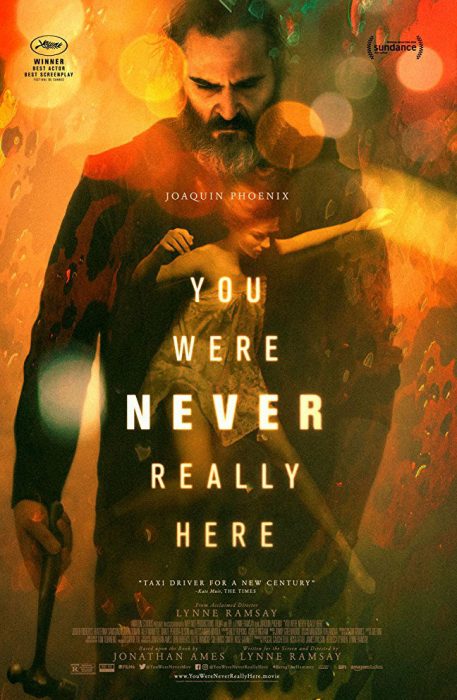 A grim, punishing film with a powerhouse performance by Joaquin Phoenix, You Were Never Really Here is not for the faint of heart. The hallucinatory thriller demands almost as much from viewers as it does from its protagonist, a hulking, psychologically traumatized combat veteran who now makes his living rescuing adolescent girls from sex traffickers. Joe’s bloated, scarred body still retains immense physical strength and his reflexive recourse to violence seems engrained in him, as does the crippling psychic damage he has suffered, not only in war but during a childhood of repeated physical abuse at the hands of his father.

With his thick beard, matted hair and inscrutable gaze, Joe suggests a man who has been psychologically buried alive, torn between succumbing to his suicidal impulses and clawing his way out of the ground. His muted expression masks deep and complex emotions. He remains alive for one reason: to care for his ailing mother (an excellent Judith Roberts). The only time we see Joe laugh or smile is when he is with her, but his sense of responsibility is a double-edged sword, as it prevents him from simply ending it all.

Joe’s latest case involves the 13-year old daughter of a New York state senator. He soon discovers that Nina’s abduction (self-possessed newcomer Ekaterina Samsonov) was part of a larger and even more sordid operation involving crooked cops and corrupt politicians.  Along with the audience Joe tries to unravel the mystery. One of Ramsay’s most innovatively-staged scenes unfolds through surveillance footage of Joe entering the brothel and searching for Nina. The grainy, black-and-white footage not only allows for succinct storytelling but also distances viewers just enough that the violence Joe employs against security guards and male patrons is jolting but never in-your-face graphic or exploitative.

You Were Never Really Here marks a perfect fusion of story, actor and director. Adapted from a novel by Jonathan Ames, it’s the best work yet by writer/director Lynne Ramsay (We Need to Talk About Kevin, Movern Callar, Ratcatcher), the petite Scottish filmmaker with a penchant for outsiders and sociopaths.  Joe is no sociopath; his chosen line of work stems from a sincere desire to save endangered children – a rescue denied him – as well as a perhaps unconscious search for meaning and redemption.  Phoenix is riveting as the sympathetic avenging angel, wading through a wasteland of anger, guilt, confusion and despair.

Ramsay’s directorial choices are lean, spare and haunting — and she could not have found a better cinematographer to render her vision than British cameraman Tom Townend, who utilizes extreme close-ups, fractured compositions, obscured framing, shadows and silhouettes to create a sense of disorientation and tension. A dark film on every level — dramatically, emotionally, visually – You Were Never Really Here is confusing at times, but that mirrors Joe’s own efforts to unravel the conspiracy.  Jonny Greenwood’s heavily electronic score harnesses the sounds of a city that never sleeps (the film is set, and was shot, in New York City), further enhancing the overall sense of turmoil and disarray. The soundscape is filled with screeching subway trains, car horns blaring and the general cacophony of the streets. It is another reflection of Joe’s tormented soul.

A man who cannot escape his past or, it seems, his present, Joe operates in an environment of violence and chaos, but there is a palpable sadness and an underlying tenderness to the character – a kind of bruised masculinity. The movie was screened as a work in progress at the 2017 Cannes Film Festival, where Phoenix walked off with Best Acting honors and Ramsay won the Best Screenplay award.